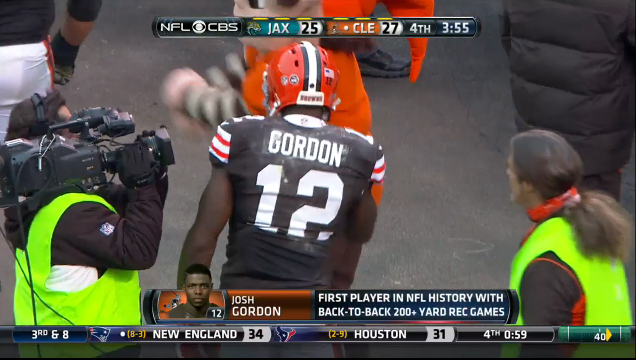 Suffice to say that when a wide receiver drops 261 yards and a pair of touchdowns on your head, a secondary had better take a close look at the film to see what went wrong whether their team won or not.

That Josh Gordon destroyed two defenses in a row at least might offer some comfort. The Jacksonville Jaguars and Pittsburgh Steelers both got torched by Gordon for 200-plus yards in back-to-back games—the first time in NFL history that has happened.

Gordon ran a variety of routes Sunday, but the one which killed Jacksonville most consistently—and the one which burned them for a 95-yard touchdown—was the simple “dig” route Gordon ran.

Virtually every time he went out on that route, not only did he catch the ball, but the catch resulted in a big chunk of yards.

The problem was that he was able to repeatedly find the open space between the cornerback and the safety. The coverage never seemed to tighten up, so Gordon and quarterback Brandon Weeden kept exploiting it.

The Cover-2 is a pretty simple zone defense. In it, the linebackers often drop back into coverage in the middle of the field (on occasion one might rush the passer, but often it is left to the four linemen), the corners spread wide and the safeties drop back—each taking one half of the field. 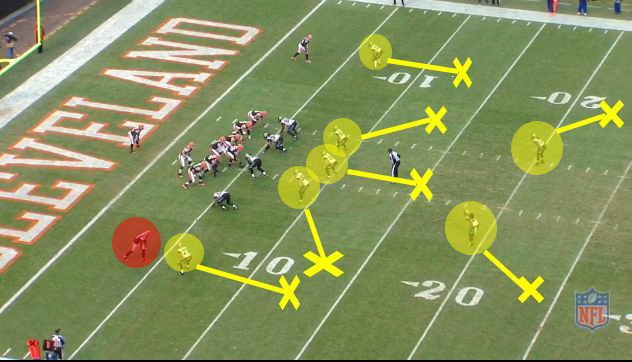 If the receiver crosses out of the corner’s zone, the safety on that side will pick him up. Of course if the safety is too deep, a large open space can develop between the zones—which is what Gordon was taking advantage of.

This time out, Gordon (red highlight) and Weeden saw the Jaguar defense dropping into the Cover-2.

The “dig” is a pretty straightforward route. It’s really a straight route for anywhere from 10 to 20 yards, then the receiver crosses in (towards the ball) and moves through the middle of the field.

There are primarily three windows you can hit the receiver in (as illustrated below) although Gordon and Weeden were doing their damage in the first window pretty much all day. I don’t think I saw Weeden even bother hitting Gordon in the middle of the field or all the way across it. 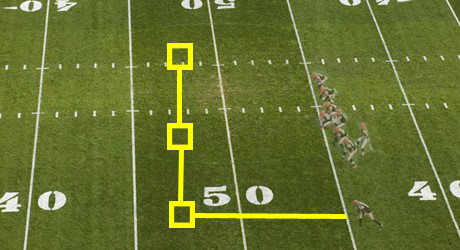 Since Gordon was so open for that first window, so often, why mess with success?

The problem is, because that’s how they ran it every time, Jacksonville safety Guy Winston is pretty sure it’s coming.

He hovers, and spies on Gordon as the receiver runs his usual 15-yard route, settling at the 20 yard line, where Weeden delivers ball. 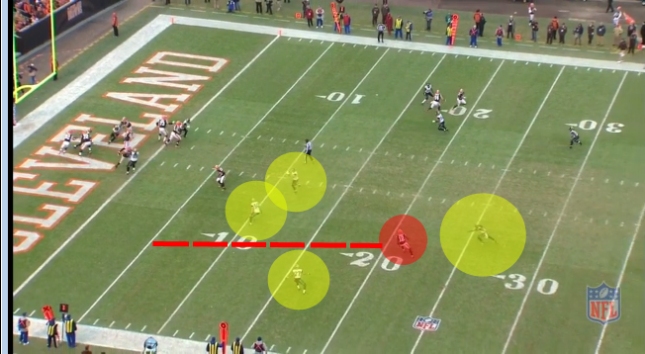 Honestly it doesn’t even look like he’s subtle about where it’s going. While you can’t see Weeden’s eyes, and therefore can’t be 100 percent sure, his head never swivels off of Gordon.

Everyone knows where this is going.

Winston has two choices. He can get on Gordon and try to jar the ball loose, at best breaking the pass up, at worst tackling him immediately. Or he can try to jump the route and attempt to intercept the pass.

He chooses the second option. That aggressiveness isn’t a bad thing for a safety and if he makes the pick, he could actually take the ball back for six points.

However, he misses it and—well you can see what happens.

Here’s where the gamble comes in when you go for the pick, not the play. There is nobody behind Winston. As the safety, he is the last line of defense. Everyone else you see trying to get Gordon is at a huge disadvantage, coming from behind and across the field. 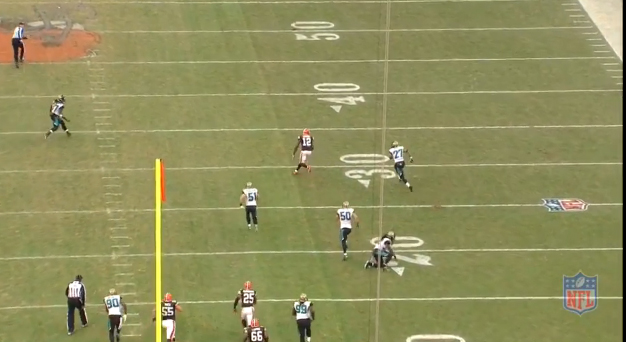 Look at that open green space.

Nobody is catching Gordon on that play.

Not #27, Dwayne Gratz who is trailing. Not #37, rookie Johnathan Cyprien who has a bad angle coming across the field and trailing.

In this case, when Winston rolled the dice, they came up craps and wiped the table.

Gordon’s touchdown gave the lead (28-25) with under four minutes to play.

Unfortunately for the Browns, the defense couldn’t hold and Cleveland lost a tough one.

The Jaguars may have won the war, but their secondary is still wondering how Gordon single-handily won so many individual battles.

Andrew Garda is a member of the Pro Football Writers Association. He is also a member of the fantasy football staff at FootballGuys.com and the NFL writer at CheeseheadTV.com. You can follow him at @andrew_garda on Twitter.